Arctic Journeys in a Changing World 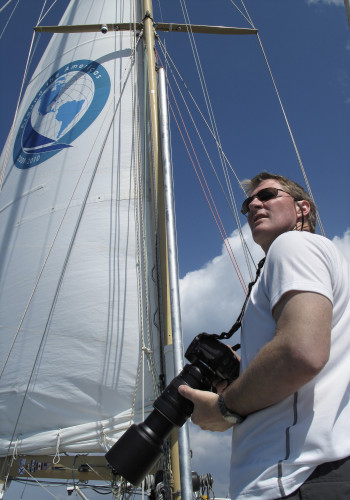 Free and OPEN to ALL.  Junior Academy members and middle and high school students are welcome and encouraged to attend.  Reservations not required.

– Lecture & book signing: Copies of One Island, One Ocean will be available for purchase and signing by the author, following the presentation.

Special thanks to Journey Through the Arctic sponsor, the Alaska Wilderness League.

Featured Speaker: David Thoreson is a professional photographer and explorer from Lake Okoboji, Iowa. David has been on adventures much of his life, photographing, exploring and studying the oceans and polar regions of the world. He is the first American sailor in history to accomplish the infamous Northwest Passage in both directions. His striking work has appeared in a broad spectrum of media, from PBS and the Smithsonian to a recent TED Talk. His ABC documentary on the 28,000-mile scientific voyage around the North and South American continents was nominated for a 2011 Emmy.When home at his Iowa studio he operates a fine art gallery featuring his photography work.

With his many extreme adventures and Midwestern roots, photographer and sailor David Thoreson has a unique story to share with the world. Growing up in a small town in Iowa, David learned to sail on a glacial lake and shaped these experiences to lead a life of exploration and discovery at the far reaches of the globe. In Artic Journeys in a Changing World, David combines stunning visuals and storytelling about sailing in the ice, lives of native hunters and scientists in the Arctic, and ultimately discovering and meeting the issue of climate change face-to-face.

In this fascinating multi-media presentation, David includes stories of his three Arctic sailing expeditions and the quest for the infamous Northwest Passage. He begins with the 1994 passage attempt aboard the 57′ sailboat Cloud Nine in which the crew of six became trapped in the Arctic’s dense pack ice and barely escaped. Thirteen years later, in 2007, David and crew were successful in traveling along famed explorer Roald Amundsen’s route and became the first American sailboat in history to accomplish an east to west NW Passage. During this 7000-mile voyage, in just 73 days, their small vessel did not touch one piece of ice in the Arctic, and personally witnessed a forty-percent loss of ice in just thirteen years.

In 2009, Thoreson was ice expert and documentary photographer on the scientifically-equipped, 64′ sailboat Ocean Watch which sailed the NW Passage from west to east. The 28,000-mile voyage circumnavigated the North and South American continents and partnered with NASA, NOAA, and numerous universities and scientific institutions to demonstrate the interconnectedness of land, sea and atmosphere. David became the only American sailor in history to transit the infamous passage in both directions.

On becoming the first American sailor in history to sail the Northwest Passage in both directions:

“I have witnessed the end of an era and the beginning of a new one. The Golden Era of exploration has come to a close and a new era involving the study and change of the earth’s climate is just beginning.”