Converting Photons to Electrons: Current Status and Likely Future of Solar Photovoltaic Energy Around the World 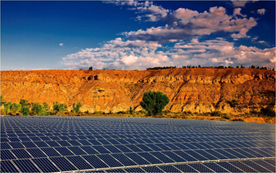 The photovoltaic effect was discovered in 1839 by French scientist Edmond Becquerel but not properly explained until Albert Einstein’s famous 1905 paper that introduced the idea of energy quanta, or what we now call photons. In 1954, Bell Labs produced the first photovoltaic cell capable of powering an actual device and in 1958, photovoltaic cells were used to power the radios on the Vanguard I satellite. In 1978, President Jimmy Carter had 32 solar panels installed on the White House but these were later removed by President Ronald Reagan in 1986.

So whatever happened to solar energy? Will we ever see solar panels on rooftops here in St. Louis? In order to answer these and other questions, Dr. Wilson discusses recent photovoltaic technology developments and compares the costs of electrical energy produced today by all sources, fossil fuels and renewable, in various locations around the world. Along the way he explores how light is converted to electricity (and conversely, how electricity is converted to light) and how global climate change is already changing the economics of energy.

FREE and OPEN to ALL. Adults, teachers, middle and high school students, and the general public are invited to attend these no-cost lectures on topical issues in science. For more information call 314-646-4544 or 314-533-8586. Registration not required.

Science Seminar Series is Co-sponsored by: