Galileo and the Church: Was the Conflict Necessary? 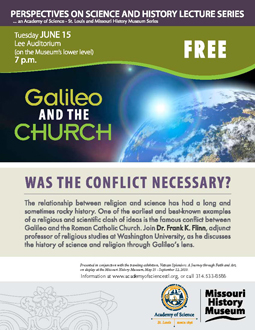 The relationship between religion and science has had a long and sometimes rocky history. One of the earliest, and best known examples of a religious and scientific clash of ideas is the famous conflict between Galileo and the Roman Catholic Church. Join Dr. Frank K. Flinn, adjunct professor of Religious Studies at Washington University, as he discusses the history of science and religion through Galileo¹s lens.

Presented in conjunction with the traveling exhibition, Vatican Splendors: A Journey through Faith and Art, on display at the Missouri History Museum, May 15, 2010 – September 12, 2010.

To be held at:
Missouri History Museum – Lee Auditorium

Lindell and DeBaliviere in Forest Park

FREE and OPEN to ALL. Middle and high school students welcome.
Parking free in Museum lots or in Forest Park.