Junior Academy members and their families are invited to a “Honeysuckle Pull” at Forest Park. 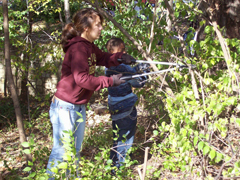 Join environmental enthusiasts as we clear Honeysuckle at Forest Park.

The invasion of bush honeysuckles over the past 20 years is the main reason that there have been few new trees sprouting and growing in the Kennedy Woods. The honeysuckle starts turning green much earlier (late February!) than the native plants. By summer, when acorns and other native tree seeds sprout, the honeysuckle has largely shaded the forest understory, causing the seedlings to die. The honeysuckle is spread largely by birds, which eat the red berries (we’d prefer to restock noninvasive native shrubs for the birds). It is particularly important to remove the berry-producing plants. During the past four years a group of volunteers has been highly successful at ridding certain areas of the woods of honeysuckle.