Made to Order: Applications for 3D Printing and Modeling in Medicine 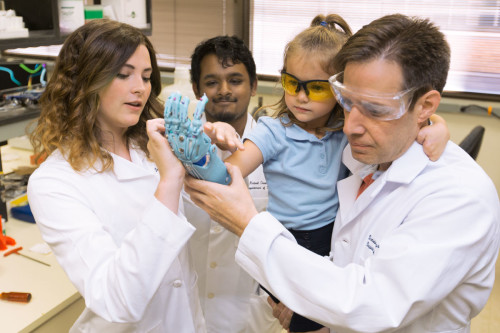 FREE and OPEN to ALL. Junior Academy members, middle and high school students welcome and encouraged to attend. Space is limited. Registration Required. Register below.

Nick Thompson is a staff scientist with Washington University School of Medicine’s 3D Printing Lab. Thompson, along with a team of physicians, scientists, and engineering students, have fashioned a niche in 3-D printing: Producing prosthetic arms and hands for children who have lost limbs from disease or accidental injury. Pediatric patients are often poor candidates for traditional prostheses, in large part because manufacturing costs can run into the tens of thousands. And for growing children, whose prostheses often require frequent resizing and replacement, the cost and process to fabricate and replace traditional prosthetics, can be prohibitive. Materials for 3D printed prostheses, by comparison, can cost a few hundred. “Our goal,” says Thompson, “is to do whatever it takes, for however long, to help kids.”

You won’t want to miss this fascinating look at the medical applications for 3D printing and the work of Washington University’s Thompson and team to customize affordable anatomical structures for kids in, Made to Order.

Made to Order is a Science in St. Louis Series partnership between The Academy of Science of St. Louis, SLCL, the Photosynthetic Research Antenna Center (PARC), Washington University’s Gephardt Institute for Civic and Community Engagement (under a St. Louis project grant). Science in St. Louis is based upon work supported as part of the Photosynthetic Antenna Research Center (PARC), an Energy Frontier Research Center funded by the U.S. Department of Energy, Office of Science, Office of Basic Energy Sciences under Award Number DE-SC0001035. We also would like to thank the National Science Foundation for support awarded to Kaitlyn Faries through the Graduate Research Fellowship Program under Award Number DGE-1143954.