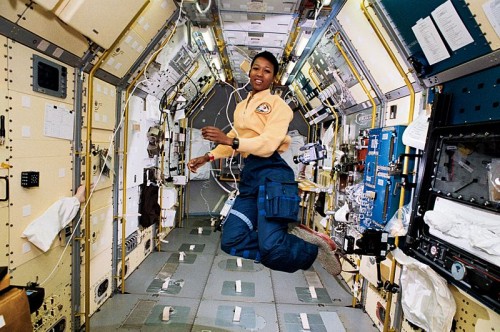 Join us for the first installment of the 2014-15 Community Cinema Series! WOMEN IN SPACE traces the history of women pioneers in the U.S. space program. The film includes interviews with Eileen Collins, the first woman to pilot a spacecraft, as well as Sally Ride’s classmates Shannon Lucid, Rhea Seddon and Kathryn Sullivan, and it features Mae Jemison, the first woman of color astronaut, and Peggy Whitson, the first female commander of the International Space Station. The hour ends with the next generation of women engineers, mathematicians and astronauts—the new group of pioneers, like Marleen Martinez, who continue to make small but significant steps forward. Narrated by Jodie Foster. Join us for cookies, informational tables, and hands-on activities before the film, and stay for a discussion afterward.

Be sure to get your picture taken at the photo booth with a space background!

The Community Cinema Series is presented by the Nine Network of Public Media and the Missouri History Museum, in collaboration with Independent Lens and Independent Television Service.

The Community Cinema screening of MAKERS: Women & Space is presented in partnership with the Academy of Science–St. Louis.