Monster in the Hollow – The Story of Missouri’s Ozark Dinosaurs 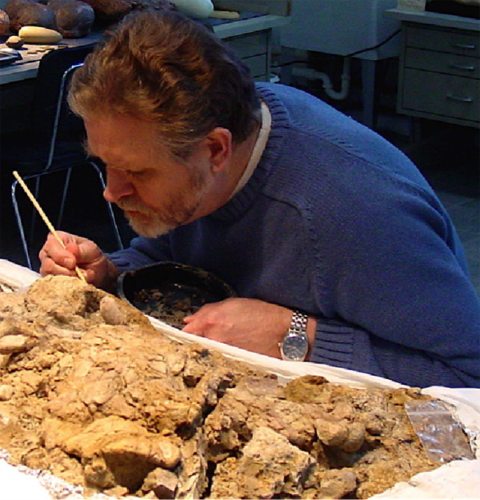 FREE and OPEN to ALL. Junior Academy members, middle and high school students welcome and encouraged to attend. Space is limited. Registration is required. Register below.

Did you know the state of Missouri has an officially recognized state dinosaur?

Join Missouri Ozark Dinosaur Project geologist, Dr. Michael Fix, as he explores the Chronister Site – Missouri’s only known dinosaur find, from the accidental discovery of dinosaur fossils there in the 1940s to the eventual scientific excavations many decades later and the major fossil discoveries that resulted from those early stumbled-upon bones.

Dr. Michael Fix is a member of the Missouri Ozark Dinosaur Project affiliated with the Bollinger County Museum of Natural History in Marble Hill, Missouri. Since 1999, the project has been conducting a scientific excavation at the site, uncovering the remains of three types of dinosaurs: a hadrosaur (duck-billed dinosaur) named Hypsibema missouriense (the official Missouri state dinosaur!), a tyrannosaurid (a relative of T. rex) and a dromaeosaur (a relative of Velociraptor). The site has also produced fossils of freshwater turtles, a strange type of tortoise with a beaded shell and spiny legs, crocodiles, a bizarre large amphibian with no back legs, and fish such as gar, bowfin, and freshwater sharks and rays.

Be transported back to the late Cretaceous period some 75 million years ago when dinosaurs and other prehistoric monsters roamed our state in this fascinating talk on The Monster in the Hollow.

Science in St. Louis is a partnership between SLCL, the Photosynthetic Research Antenna Center (PARC), Washington University’s Graduate School of Arts and Sciences, and The Academy of Science of St. Louis. Science in St. Louis is based upon work supported as part of the Photosynthetic Antenna Research Center (PARC), an Energy Frontier Research Center funded by the U.S. Department of Energy, Office of Science, Office of Basic Energy Sciences under Award Number DE-SC0001035. We also would like to thank the National Science Foundation for support awarded to Kaitlyn Faries through the Graduate Research Fellowship Program under Award Number DGE-1143954.