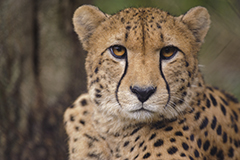 Saint Louis Zoo Curator of Mammals/Carnivores Steve Bircher will share his insights on the plight of endangered cheetah. Cheetahs are in trouble in the wild. In the last century, the cheetah population has declined from 100,000 to fewer than 12,000 individuals, and the species has become extinct in at least 13 countries. “target=”_blank”>International Cheetah Day is celebrated around the globe on Dec. 4.

The Saint Louis Zoo is home to five cheetah (three males, two females). In 1974, the Zoo opened the Cheetah Survival Center, a facility for research and captive breeding. The Zoo coordinates its breeding efforts with other zoos as part of the Species Survival Plan® (SSP) for this species. Already the Zoo has produced more than 30 captive-bred offspring. These animals may provide insurance for wild populations in the future.

Bircher is responsible for managing the Zoo’s carnivore collection, exhibits and physical plant. He began working at the Zoo 35 years ago as an animal keeper, but also held positions as Commissary Supervisor, Zoologist, and Assistant Mammal Curator during his Zoo career. In addition, Bircher serves as Director of the “target=”_blank”>Center for Conservation of Carnivores in Africa within the Zoo’s WildCare Institute. He also serves on the Association of Zoos and Aquariums (AZA) management committees for several Carnivore Taxon Groups and Species Survival Plans.

FREE and OPEN to ALL. Adults, teachers, middle and high school students, and the general public are invited to attend. For more information call 314-646-4544 or 314-533-8586. Registration not required.