Stratospheric Balloons Over Antarctica: Astrophysics with Instruments 125,000 Feet Above the Ground

Free and OPEN to ALL.  Junior Academy members and middle and high school students are welcome and encouraged to attend.  Reservations not required. Parking is free in the Zoo North Lot.

During the Antarctic summer (December and January), scientists from Washington University’s Cosmic Ray Group, in collaboration with partners from across the globe, launch their research into the stratosphere in a quest to understand the fundamental nature of our universe. Helium-filled balloons as big as a football stadium lift two-ton instruments above 99.5% of the atmosphere. There, one of these instruments detects cosmic rays– atomic nuclei that have been accelerated by stellar explosions to speeds close to the 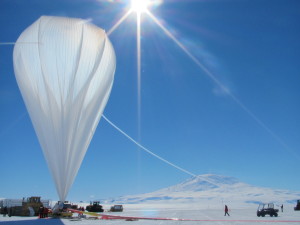 speed of light. These cosmic rays help us understand how stars in our Milky Way Galaxy make heavy elements from lighter elements. Another instrument looks down from that altitude monitoring a million square kilometers of ice for radio pulses signaling the arrival of extremely high-energy neutrinos. Since the universe is almost perfectly transparent to neutrinos, the highest energy neutrinos are probably messengers from extremely distant galaxies. You won’t want to miss this fascinating talk by Academy Fellow, Martin Israel, on astrophysics in Antarctica!