Home  ›  People of the Academy

On March 10th, 1856, The Academy of Science of St. Louis held its first official meeting. George Engelmann, known at that time for his works in botany, physics and meteorology, was elected as President. Other members that attended this first meeting included 11 physicians, one lawyer, one engineer, James Buchannan Eads, and a businessman. They created The Academy of Science – St. Louis in order to promote the advancement of science in the rapidly evolving town of St. Louis, Missouri, and to disseminate the discoveries that flowed from the opening of the American West. Important members of the St. Louis community, with names that are still widely known today, attended.

These men and other members of The Academy held semi-monthly meetings where members read letters from their corresponding counterparts (local organizations in support of The Academy, researchers, or other correspondence letters), considered papers for publication in Transactions, discussed topics of scientific interest, elected new members, and gave numerous presentations.

These early members and founders wanted to promote the studies of

It is these twelve disciplines that make up the basis for the publication of the Transactions of The Academy of Science of St. Louis. 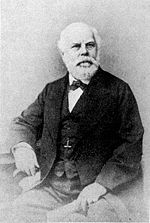 upporter. Growing up in Germany, he studied medicine and then traveled to America in 1834 to settle some business matters for several uncles who had invested in property near Belleville, Illinois. Engelmann ended up staying in the United States because he was so close to the American West, a land that was virtually unknown to botanists; and he was intrigued by the flora of the Western United States. While living in Illinois, Engelmann was able to practice medicine, an undertaking that provided the funds for him to travel West, along the Mississippi River Valley, in Arkansas, Louisiana, and Missouri, collecting and researching the flora there. These expeditions secured Engelmann’s place as a prominent amateur botanist in St. Louis where he met Henry Shaw, a philanthropist best known for founding the Missouri Botanical Garden in St. Louis, Missouri. Engelmann and Shaw became good friends, and Engelmann convinced Shaw to build gardens on the land that he owned in St. Louis, now the Missouri Botanical Garden. 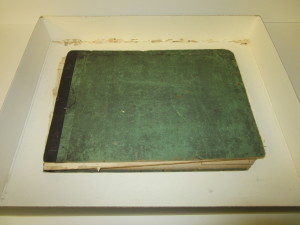 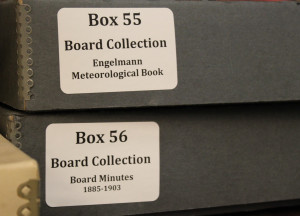 shed paper in the Academy’s Transactions in 1859 was called, “Two New Dicecious Grasses of the United States.” His last published piece within the Transactions ended with the Obituary of his good friend Frederick Adolphus Wislizenus in 1892. 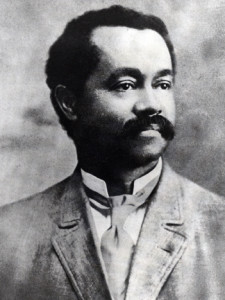 h.D. in zoology from the University of Chicago, and the first person to discover that insects can hear and alter behavior based on previous experience. Turner showed that insects were capable of learning, illustrating (in two of his most famous research projects) that honeybees can see in color and recognize patterns. Not the least of his accomplishments, Turner was influential in education and served as a high school teacher, believing that the power of education had the ability to change lives.

Quote and Image Courtesy of  The National Academy of Science 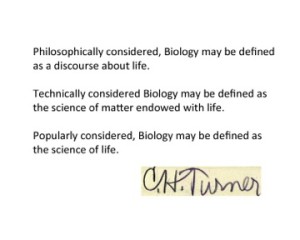 Turner published almost fifty papers during his lifetime on subjects in neurology, invertebrate ecology and animal behavior.
His most significant contributions were in the field of insect behavior studies. He was the first to describe a kind of insect orientation performance that came to be known as Turner’s circ 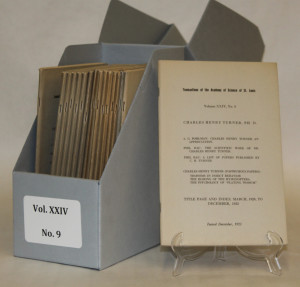 ling. Tuner passed away in February 1923; and that year, The Academy of Science of St. Louis published a special Transaction  issue to commemorate Charles Henry Turner.

After graduating from the University of Iowa in 1870, Francis Nipher received such high honors that he was asked to stay for a tutorship. Soon after, he was offered a professorship in the physics department at Washington University in St. Louis. There, he organized the second state weather service in Missouri in 1877. From 1878 until 1883, he conducted a magnetic survey of Missouri, publishing the annual reports in The Transactions of The Academy of Science of St. Louis. Nipher was a member of numerous scientific societies and in 1884, he became the president of The Academy of Science – St. Louis. He was president of The Academy for several years while writing the reports that were included in The Transactions.

Charles Valentine Riley was a major 19th century figure who had a vision for enhancing the success of agriculture through new scientific knowledge. Riley was born in London in 1843, Riley immigrated to the United States at age 17 and worked as a farm laborer, writer and illustrator.

Riley was named Missouri’s first State Entomologist in 1868. In that same year, Riley also began writing for The Transactions of the Academy of Science of St. Louis. His entries included works on biology and entomology. Four of his written and published works can be found in Volume III, No. 4.

The impact of Riley’s work of more than a century ago is still being felt today, not only in the fields of entomology and agriculture but also in other natural sciences. Riley was truly a “whole-picture” person – an artist, a poet, a writer, a journalist, a linguist, a naturalist, and a philosopher as well as a scientist. Riley was also the Curator of the U.S. National Collection of Insects at the Smithsonian Museum of Natural History when he died in 1895 of injuries in a Washington, D.C. accident.

James B. Eads was a self-taught engineer. He chaired the Academy’s first committee on physics and later served as president of the Academy. Eads designed and built armored steamboats for the Union during the Civil War and engineered a system of jetties that opened an unobstructed Mississippi River channel to the Gulf of Mexico. His most celebrated accomplishment however; was the St. Louis- Illinois bridge he built over the Mississippi River at St. Louis, the world’s first cantilevered alloy steel bridge today, known as the Eads bridge.