Why is this important?

It’s our past history that grounds and informs our future. Today’s research and discoveries are launched from the basis of the shared ideas, methodologies, and explorations of those who came before us; laying the groundwork for the discoveries, innovations, and new technologies of tomorrow.

As of 2015, The Academy’s collection has been re-housed into new archival boxes that allow the Transactions, which make up the majority of the collection, to be covered and away from dust and UV light. Housed inside The Academy of Science – St. Louis offices, the collection is available to be viewed upon request for research purposes, or even general interest in St. Louis history. 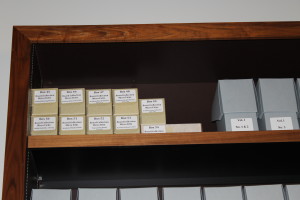 The collection of The Academy of Science – St. Louis did not always look like this. In 1856, the year The Academy was established, a state charter was requested and a library and museum were developed. Academy members wanted to collect and preserve scientific specimens and regarded this as an important and stimulating activity. This impressive collection included mounted and preserved specimens of mammals, birds, reptiles and fish from Charles P. Chouteau, a descendant of St. Louis founder, Auguste Chouteau, and owner of the American Fur Trading Company. By 1869, The Academy’s museum collection and library grew; and with the help of the Smithsonian Institution, copies of Transactions were distributed to libraries and research institutions around the world. Here is an excerpt taken from Part II of The Academy’s collection, its Board Collection.

“I am gratified to learn that the St. Louis academy is in a prosperous condition, and again actively engaged in advancing the cause of science. Nothing is more important to the life of an institution of the kind than the publication of Transactions; and from your position in a country abounding in new objects of scientific interest, there is no want of original material from which to dedace original scientific truths.”

The Transactions helped to establish St. Louis’ reputation as a center for science. The Academy kept its collections in the O’Fallon Dispensary building at the St. Louis Medical College, where many of the specimens were displayed. Local citizens could visit the small museum free of charge on Thursdays and Fridays from 1pm till sunset. In 1869, a fire broke out in the Dispensary Building and destroyed the collections. The Academy Library survived with slight damage and the library collection continued. By 1881, The Academy library contained nearly 3,000 books and 8,000 issues of scientific periodicals.

The second part of the collection includes numerous boxes filled with additional Academy history. Membership Correspondence, Junior Academy of Science Membership notes, Administration notes from the early 1900s, and memorabilia such as invitations and flyers from programs and events, as well as Academy meeting notes, museum proposals and other published works are stored within these boxes.

The second Latin text found on the pages of the book in the center of the seal reads, “Novum Or. Ga,” short for Novum Organum which was a philosophical text published in Latin in 1620 by Francis Bacon. This work presented an inductive method for scientific and philosophical inquiry and is why it was included as the center focus of the seal, as it reflected The Academy’s mission. 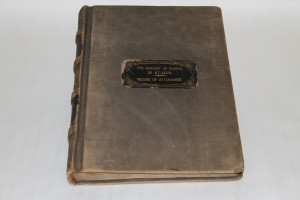 The early Academy also recorded extensive minutes on meetings and collected them in bound books for record keeping. An example is The Academy of Science of St. Louis Record of Attendance. This book collected the signatures of Academy members and visitors who attended the meetings from January 5, 1914, which was the 1,035th meeting, to March 18, 1918, the 1,092th meeting. It also features signatures of two prolific scientists who made numerous additions to the Transactions— physicist, Francis E. Nipher, who helped govern the Academy between 1881 and 1903 and wrote works suc 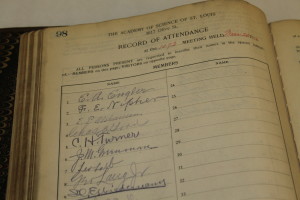 h as, “Physics During the Last Century” and, “Variations in the Earth’s Magnetic Field,” and entomologist, Charles Henry Turner. Turner published almost fifty papers during his lifetime on topics that included neurology, and invertebrate and animal ecology. His specialty, however, and significant contributions were in the field of insect behavior studies.

The Style of the Transactions

There are 33 volumes within the history of Transactions. These Transactions, which were the submitted works of scientists published by The Academy of Science – St. Louis, span from the first published volume in 1856 to the 33rd, ending in 1988. Topics ranging from meteorology, botany, physics, and entomology fill the pages of Transactions.

The scientific articles contained within the Transactions were written by Academy members, and other scientists, explorers, and amateur naturalists, who wished to publish their findings. As you read within the Transactions, notice the meticulous and descriptive writing, in-depth observations and findings often detailed at great length. So that the writer might visually portray their findings to the reader, charts, maps and drawn images often fill the pages. You’ll find a great example of detailed observation in Volume XXVII, titled, “The Prairie Horned Lark” by Gayle B. Pickwell – the only publication within that volume. 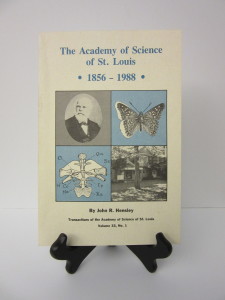